It was a Saturday and a beautiful day for a drive to Morinville to check out the tent trailers at RV City.
I had no idea of tent trailer options.

It had been years since our family had a green and orange soft top pulled by a fully loaded station wagon.

My Dad had cut a board to hang between the two double beds for my little brother to sleep on. 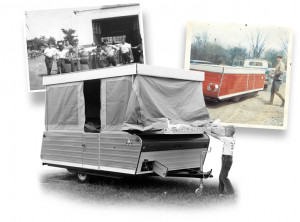 Two more family members slept on the floor. The only upgrade was particle board sliding doors on the space below the beds and a canopy with a zipper that was impossible to attach. Manual effort was needed to open up the trailer like a present, first one side then the other, sliding aluminum arms into slots below to keep the sleeping surfaces steady. The final touch was tucking the cloth tent with reinforced corners over the edges like a mattress cover and voila! We had sleeping arrangements for the night for seven tired travellers.

Walking through the lot at RV City, I meandered in and out of different models setup there: A-frame, soft top, hard top, manual or mechanical lifting, a bed on each side but could be queen or king, inside kitchen, heaters, toilets, new and used. I kept changing my mind about what I needed as I saw each unit had something slightly different. I wanted it all! I wandered for a 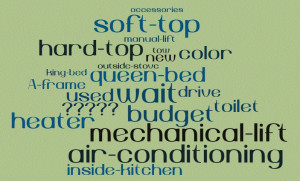 while,increasingly excited about the possibilities, before being approached by a RV City employee who asked if I had any questions. He was really helpful in helping me understand my needs. In the end, we arrived at I would need to re-think my camping setup. At the time, I was driving a Honda CRV, and I learned you need to be careful about such a thing as towing weight. I don’t travel light so the loaded towing weight was going to be an issue for my CRV. The camping dream minus tenting sort of sputtered at that point.

Then it happened – we were tenting 🙁 the September long weekend at Kimball Lake in Meadowlake, Saskatchewan. Promising sunlight clouded over and grey clouds gathered through Saturday. We awoke on Sunday to pouring rain. Downpour rain. Torrential rain.

Being either optimists or lazy or both, we had not put up the screen room. But my friend’s sister was in what I can only say is camping paradise. She had arrived in a camper van – she could sleep, eat, read – really, never leave, her dry home away from home. Eventually, we all ended up in the camper van, marvelling that a table could be erected and seats turned to allow for 4 to dine, play games, talk and stay dry. 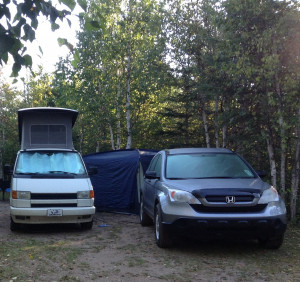 On top of the already large number of pluses – the only setup she had done was plug in to the power box. When it was time to leave, she just unplugged. Not so for the rest of us. Wet, muddy tents and supplies were forced back into vehicles as quickly as possible, but still taking well over an hour, seemingly not fitting as well as they had when we left Edmonton three days earlier.
I was offered the chance to buy that camper van. I was dazzled and delighted by the thought of comfy seats and cutlery and dishes I didn’t have to unload or wash over a picnic table in the dark. I could see myself waking up in the bed, hearing rain on the roof or the sound of birds enjoying sunshine – either one brought a smile to my face. There would be easy backing up, effortless setup and take down. But, that particular van had some problems – the expensive kind. I think I actually went through a mini period of grief letting that van go.
But the best was yet to come! 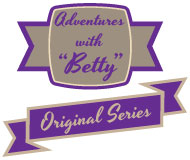